Get me outta here!

This isn’t a new idea, but it is a great one. Set up your kids with their own clothesline. It’s a wonderful way to work on fine motor skills, and have fun at the same time! 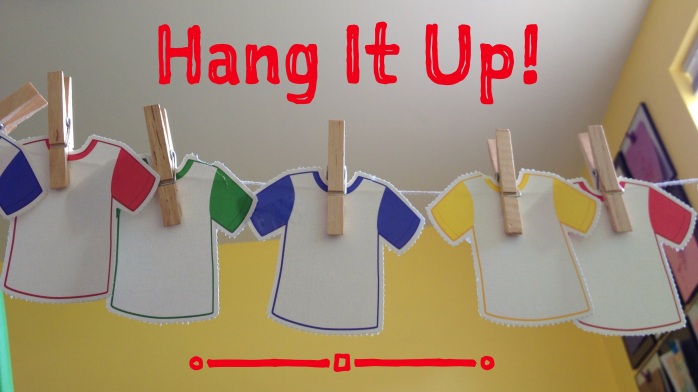 I strung up some twine in our playroom, and then provided Trevor with an invitation to hang up paper t-shirts with wooden clothespins.

I found these shirts as part of a teacher’s back-to-school packet on clearance for $1, but you could easily just make some yourself out of cardstock or construction paper. 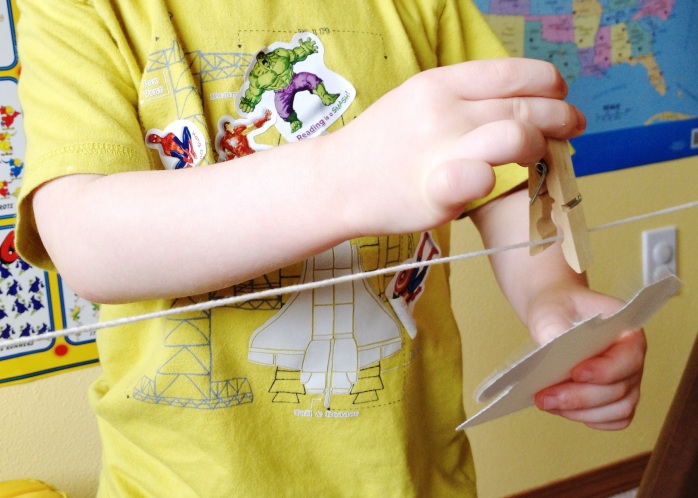 I had to demonstrate to Trevor how to use both hands to hang up a shirt on the clothesline, but after that he only needed a little verbal prompting. I was very impressed with how well he did with this!

What is your favorite clothespin activity?

In case you needed an excuse to drink more wine…

Save those wine corks! They have so many possibilities for uses in kids projects. All you need for this great fine motor activity are some wine corks and pieces of cut up pool noodle (which you will also fine a million uses for).

I presented this activity simply by offering a bowl full of corks and some pool noodle pieces set out on Trevor’s activity tray (aka a cookie sheet from the Dollar Tree 😉 ). I then invited him to put the corks inside the pool noodles. This is a great way to work on bilateral coordination, as the child has to use both hands to do this. Trevor had a lot of fun with this 🙂 You could also make this into a pegging-type game, where you stack pool noodles and corks together to see how tall you can make a tower. Trevor opted not to try that though. I always give him choices when we do an OT type activity.

What are your favorite uses for pool noodles outside of the pool?

I have to admit that I often leave Trevor’s therapy sessions feeling defeated. His struggles and differences are magnified. But today was different. He rocked OT today. And despite having a rough time at the beginning and at the end as well, all I see right now is a little boy who rocked it. He got on the Power Pumper car and blew both me and his OT away when he started pumping the car. All. By. Himself.

He was so proud of himself and had a blast. He kept wanting to “pick up friends”, so he pumped that car around the clinic, picking up beanie babies and other small toys. His OT kept running to get more things for him to collect because he wanted to keep going, something that never happens. 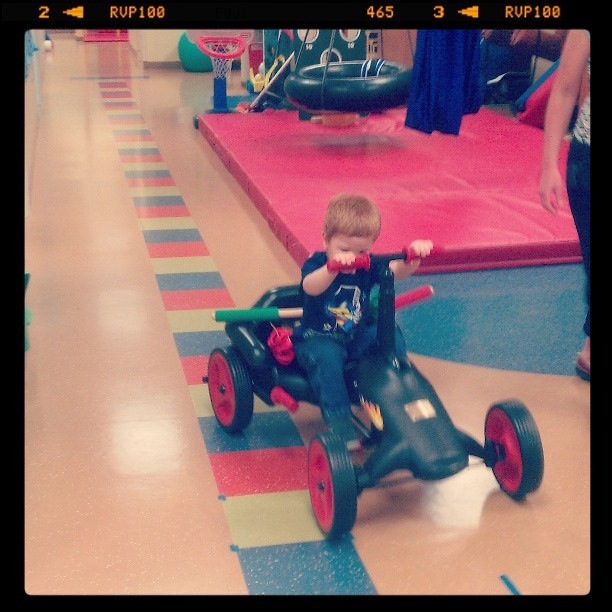 This year we made a Leprechaun Trap for St. Patrick’s Day.  I had never heard of the idea until this year, when it seemed to be everywhere on Pinterest.  I love doing things to make the holidays fun for my kids, no matter how big or small, so this idea is perfect!

I covered an old shoebox in white paper, then cut strips of paper in red, orange, yellow, green, blue and purple for the lid of the box.  Then I had Trevor work on color matching and decorate the rainbow lid with pom poms and stickers (a great way to sneak in some fine motor and bilateral coordination work too…cause I’m tricky like that!) 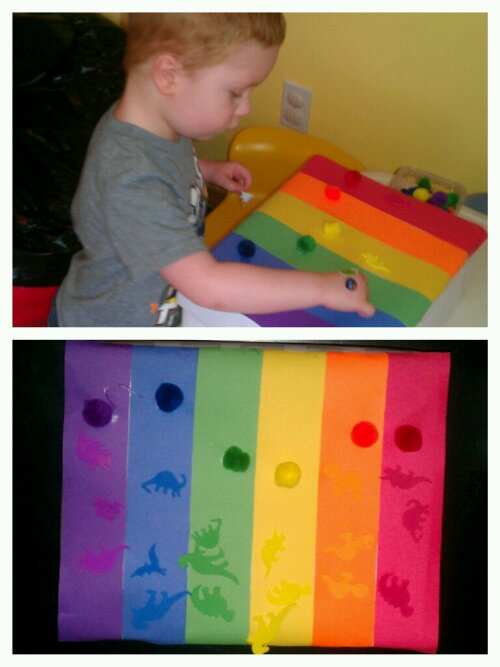 The night before St. Patrick’s Day I propped the lid open with a stick, adding a cup filled with gold coins inside to entice that leprechaun.  Trevor also set gold coins out around the outside of the trap too.

Then on St. Patrick’s Day when he woke up he discovered that the leprechaun (whom he named “Larry” because of a book they read at preschool) caused all sorts of mischief!  I turned our dining table chairs upside down, put cars on the couch “watching” TV, put slippers on top of shelves, throw pillows on top of bookshelves, and more.  I also left a gold coin in each spot that Larry the Leprechaun caused mischief.  And of course in true Trevor fashion, since he notices the smallest details, he thought Larry caused even more mischief than I intended.  Anything that had been moved while he was in bed he thought the leprechaun did!

Inside the box I painted green footprints, left a note from the leprechaun, and also put in a little present for him.  He was bummed we didn’t catch that sneaky leprechaun, but of course he enjoyed getting a little gift.  And he was laughing about “Larry getting into mischief” all day yesterday!  Hmm…maybe Trevor is a leprechaun too? 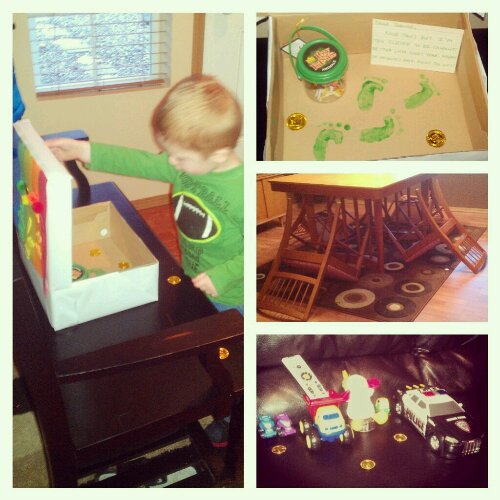 And even though she was super fussy, we couldn’t leave Miss Paige out of this St. Patrick’s Day post.  My little girl is getting so big! 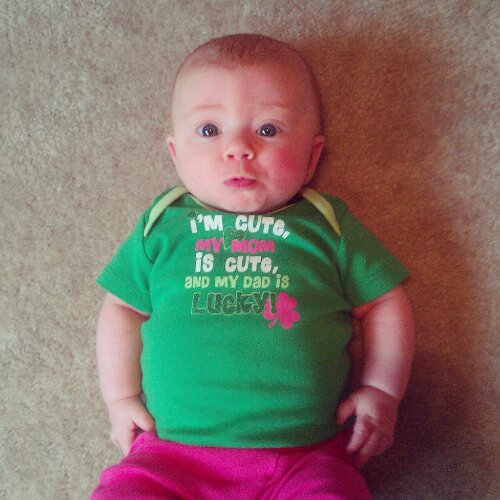